As the conflict in Syria enters its fifth year Caritas continues to support the Syrian people and is one of the few international agencies that still operates in the country. But the war has created a humanitarian disaster that extends far beyond its borders.

Nearly 11.3 million people have been forced out of their homes – and 4.8 million of those have fled to other countries to escape the violence and to try and rebuild their lives.

Syria is the biggest emergency for Caritas right now and dedicated staff from Caritas Jordan, Caritas Lebanon and Caritas Turkey are doing everything they can to support refugees.

But in the past 12 months the scale of the crisis has taken on a global perspective as a growing number of Syrians moved from neighboring countries to make the perilous journey across the Mediterranean to Europe.

Caritas organisations in France, Austria, Greece, Croatia, Italy, Serbia, Slovenia, Macedonia, Hungary and elsewhere in Europe have responded with speed and determination to the biggest mass migration of people the world has seen since World War II.

Caritas, the helping hand of the Catholic Church, is committed to saving lives and livelihoods.

Pope Francis has expressed his solidarity with Syrian migrants and on a visit to the Greek island of Lesbos in April he met refugees at the Moria migrant centre. He invited three Syrian refugee families to accompany him back to Rome.

We hope that the world will heed these scenes of tragic and indeed desperate need, and respond in a way worthy of our common humanity.
– Pope Francis, Lesbos (April 2016) 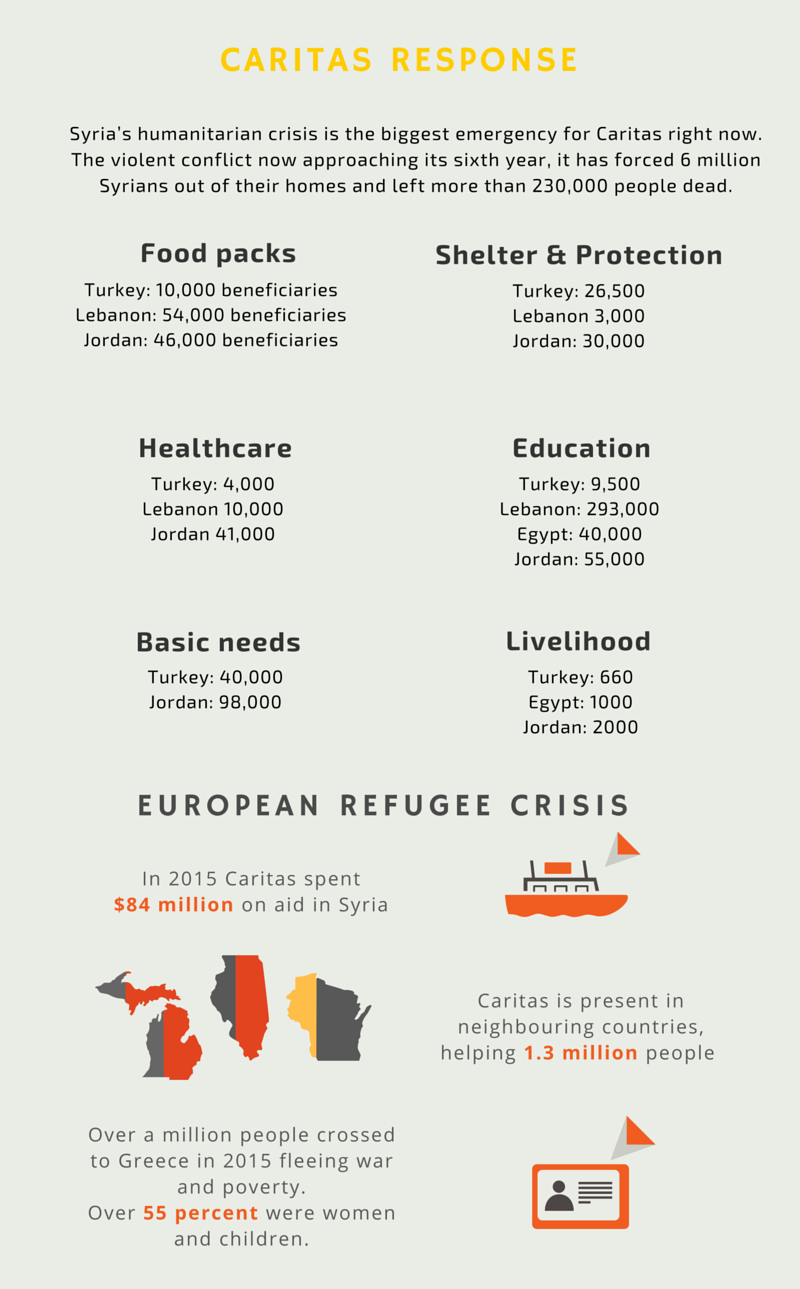 Through its church partners on the ground, Caritas has reached tens of thousands of families in Syria, Lebanon, Jordan and Turkey. They are providing food, emergency shelter, free healthcare and medical support, blankets, clothing and household goods as well as counseling services and child-friendly places for children to play and learn.

But the mass movement of hundreds of thousands of people has created new challenges for Caritas in the Middle East and Europe.

While Italy has received a slightly larger number of sea arrivals this year, Greece is the most seriously affected so far. The situation of the new arrivals is dire: Capacity on the Greek islands—Lesbos, Chios, Kos and Rhodes—is overstretched.

Pope Francis has highlighted the assistance Caritas has given to Syrians regardless of the ethnic or religious affiliation as one way to contribute towards peace. He is urging people to do more and has called for every parish in Europe to welcome one family.

Caritas Internationalis is working with European governments and Catholic communities to welcome refugees while also working for peace in their homeland.

The greatest gift we can offer to one another is love.
– Pope Francis on a visit to Moria refugee camp on Greek island of Lesbos (April 2016)

What can you do to help?